Spring is my favorite season.  The warmth of the sun, the freshness of the air and the lovely surprise of flowers and trees blooming make me happy.  This year I am hoping, like everyone, that spring brings a beginning to the end of the global pandemic, that we are able to spend time with family and friends, that we are able to travel and return to living more of a normal life.

When it comes to travel, there is certainly a sense of optimism as evidenced by the uptick in hotel/vacation home and flight reservations.  While it is a wonderful emotional boost to anticipate and plan for a vacation, it is also a boost for the leisure and entertainment industries—both having taken substantial hits over the past year. I find it particularly interesting that people are planning not only for the summer, but they are already planning for the 2022 ski season!  But, back to spring…

We have truly missed seeing our clients and colleagues in person.  Zoom has been a valuable means of staying in touch and communicating, but it is so much nicer to sit in a room together.  We plan to continue to follow CDC guidelines regarding indoor meetings, and look forward to meeting with you in person as soon as it is safe to do so.

Enjoy the beautiful days ahead, stay well and get vaccinated!

On March 31, 2021, President Biden introduced the American Jobs Plan, a proposal designed to improve the country’s aging infrastructure. In total, the plan will invest more than $2 trillion over the next decade. The specific provisions of the proposal will likely change prior to making its way to Congress and will face steep opposition from Republican lawmakers. While it’s unclear if the plan will pass or in what form, the following is a high-level summary of what we know so far, based on the White House Fact Sheet.

Infrastructure and transportation. A total of $650 billion will be invested into infrastructure at home. This will include clean drinking water, high-speed broadband internet, electrical infrastructure, affordable housing, public schools, learning centers, and community colleges. It will also be put toward modernizing Veterans Affairs hospitals. In addition, the plan will put $621 billion into transportation infrastructure with the goal of repairing bridges and roads; modernizing public transit; improving rail service, ports, waterways, and airports; and increasing use of electric vehicles.

Health care. A total of $400 billion will be put toward expanding access to quality, affordable care for the elderly and people with disabilities, with the goal of also creating new jobs and increasing pay, benefits, and opportunities for caregivers.

The IRS. Funding to the IRS will be increased to help ramp up its enforcement of tax policies (i.e., audits) with corporations.

While the American Jobs Plan proposes several tax changes specifically targeting corporations, Biden also discussed other tax changes during his campaign that would more directly affect individuals. These changes, which the administration may seek to implement in future legislation, could include the following:

Please note: These are informal proposals and are likely to change if incorporated into a bill. If they become law, you will be affected only if the rulings are specific to your financial situation. As always, we will continue to monitor the situation and will be there to help you navigate any future changes.

Market Update for the Quarter Ending

U.S. stock markets saw gains for the month and quarter. The Nasdaq Composite gained 0.48 percent during March. The S&P 500 and Dow Jones Industrial Average (DJIA) saw stronger results, up by 4.38 percent and 6.78 percent, respectively. On a quarterly basis, the Nasdaq Composite gained 2.95 percent, and the S&P 500 gained 6.18 percent. The DJIA led the way with an 8.29 percent return.

These positive results coincided with better-than-expected earnings growth. According to Bloomberg Intelligence, as of March 30 with 99 percent of companies having reported, fourth-quarter earnings for the S&P 500 were up by 5.8 percent. This result is much better than analysts’ initial expectations for an 8.8 percent drop.

Technical factors were also supportive for markets. Despite some volatility along the way, all three major indices remained well above their 200-day moving averages. This marks three straight quarters where the indices finished above their respective trend lines.

International markets had a similar month and quarter, with riskier assets seeing more volatility. The MSCI EAFE Index increased by 2.30 percent during the month and 3.48 percent during the quarter. The MSCI Emerging Markets Index declined by 1.49 percent in March but managed a 2.34 percent return for the quarter. Both international indices remained above their 200-day moving averages.

Fixed income markets had a more challenging time. The 10-year Treasury yield ended the month at 1.74 percent, up from 1.45 percent at the start of the month and 0.93 percent at the start of the quarter. Long-term rates rose throughout the quarter due to increased expectations for growth and inflation as the economic recovery continues. The Bloomberg Barclays U.S. Aggregate Bond Index fell by 1.25 percent during the month. This contributed to a 3.37 percent decline for the index during the quarter.

Medical Risks Back in Play

The combination of the economy reopening and the spread of more contagious variants of the virus has increased risks again. Case counts started to creep up in March, the number of tests fell, and the positive test rate increased. Vaccination efforts improved, however. We finished the month with 16 percent of the population fully vaccinated and 29 percent of the population having received at least one dose.

Despite the rise in medical risks during the month, the economic data continued to improve. March’s jobs report showed that 916,000 jobs were added during the month. Much of the job gains were concentrated in the leisure and hospitality sectors. We also saw a decline in the average number of weekly unemployment claims in March.

As you can see in Figure 1, the Conference Board Consumer Confidence Index hit a new post-lockdown high in March. This indicates consumers are starting to see a light at the end of the tunnel. 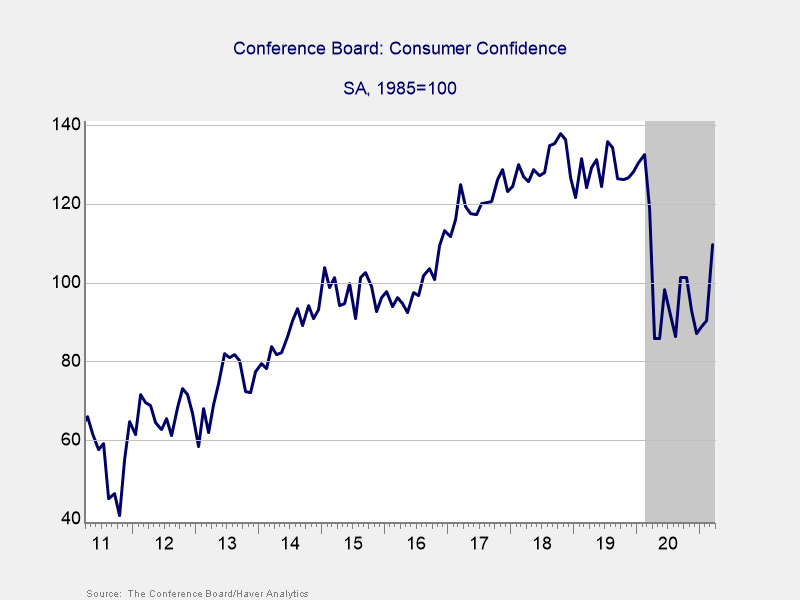 Consumer spending saw a dip in February. It was largely due to the inclement winter weather during the month, however, as well as the fading impact from the December stimulus package. Manufacturer confidence finished the month at its highest level since 1983 due to strong buyer demand and low business inventory. Business spending saw a modest weather-related decline in February.

The Progress Is Real, but Risks Remain

We made real progress with vaccinations and the economy during the month. But even so, the rising case counts toward month-end served as a reminder that the medical risks are still out there. The economy looks to have enough momentum to ride them out until the pandemic is brought under full control, however. As always, a well-diversified portfolio that matches investor goals and timelines represents the best path forward for most. If concerns remain, contact your financial advisor to discuss your financial plan.

All information according to Bloomberg, unless stated otherwise.

How to Navigate Medicare and Make Smart Financial Decisions

Disclosure: Certain sections of this commentary contain forward-looking statements based on our reasonable expectations, estimates, projections, and assumptions. Forward-looking statements are not guarantees of future performance and involve certain risks and uncertainties, which are difficult to predict. Past performance is not indicative of future results. Diversification does not assure a profit or protect against loss in declining markets. All indices are unmanaged and investors cannot invest directly into an index. The Dow Jones Industrial Average is a price-weighted average of 30 actively traded blue-chip stocks. The S&P 500 Index is a broad-based measurement of changes in stock market conditions based on the average performance of 500 widely held common stocks. The Nasdaq Composite Index measures the performance of all issues listed in the Nasdaq Stock Market, except for rights, warrants, units, and convertible debentures. The MSCI EAFE Index is a float-adjusted market capitalization index designed to measure developed market equity performance, excluding the U.S. and Canada. The MSCI Emerging Markets Index is a market capitalization-weighted index composed of companies representative of the market structure of 26 emerging market countries in Europe, Latin America, and the Pacific Basin. It excludes closed markets and those shares in otherwise free markets that are not purchasable by foreigners. The Bloomberg Barclays Aggregate Bond Index is an unmanaged market value-weighted index representing securities that are SEC-registered, taxable, and dollar-denominated. It covers the U.S. investment-grade fixed-rate bond market, with index components for a combination of the Bloomberg Barclays government and corporate securities, mortgage-backed pass-through securities, and asset-backed securities. The Bloomberg Barclays U.S. Corporate High Yield Index covers the USD-denominated, non-investment-grade, fixed-rate, taxable corporate bond market. Securities are classified as high-yield if the middle rating of Moody’s, Fitch, and S&P is Ba1/BB+/BB+ or below.

Moore Wealth is located at 50 Carrol Creek Way Ste 335, Frederick, MD 21701 and can be reached at 301.631.1207. Securities and Advisory Services offered through Commonwealth Financial Network ®, Member FINRA, SIPC, a Registered Investment Adviser, FINRA’s BrokerCheck. This communication is strictly intended for individuals residing in the states of CA, CO, DC, DE, FL, MD, MN, NC, NJ PA, TN, UT, VA, VT, WA, WV. No offers may be made or accepted from any resident outside these states due to various state regulations and registration requirements regarding investment products and services.